Put your strength and stamina to the test with the Bungee run,

An inflatable two lane track upon which a pair of competitors run against the pull of a bungee chord attached to a belt around their waist.

Each participant attaches a body harness before attempting to run as far as he/she can,

before the bungee cord catapults them back to the start,

they race against each other to see who can place the Velcro marker furthest along the centre wall.

The objective is to place Velcro markers at the furthest points possible before the elasticity flings them back down the inflatable.

This item is a perfect add-on to any family fun day, sports club, team building and universities.

Or call us, we're open

Please do pass on my thanks and best wishes to the two guys who set up and took down the equipment on Friday night. They were a real credit to your company, polite, courteous and hard working and made everything seamless.

Arranging a BBQ for over 120 children and adults is quite stressful but with their professionalism, everything ran smoothly.

Big Balls Challenge The Big Balls challenge has arrived! Climbing up the ladder to the platform, and you’ll be presented with 4 huge multi coloured balls to clamber, jump, fall off and finally if your lucky…

Surf simulator hire Surf simulator hire, is radical fun. Imagine you’re surfing the waves, only you don’t need to worry about getting wet! With a full-size surfboard floating in an inflatable sea, you can ride… 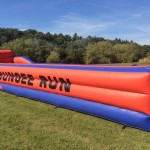 Primarily covering South of England, please see a list of some of our locations below. UK nationwide also available.